“M&A activity during the first half of this year has been quite subdued,” Sherri Haskell, CEO and founder of angel investment consortium Canna Angels LLC, said in an interview. “I imagine that is going to accelerate greatly in the second half of the year and the first half of next year.” 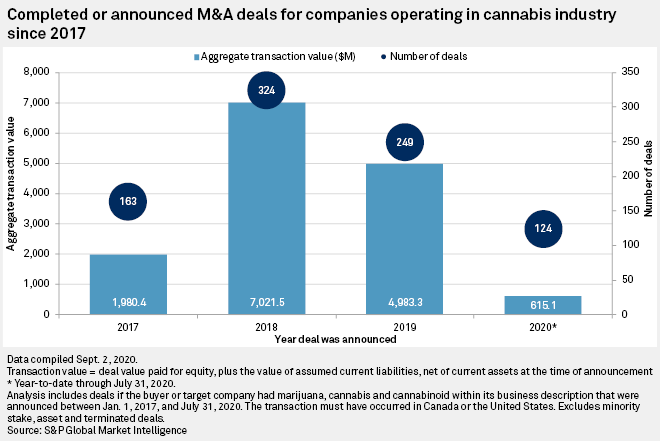 A drop in company valuations complicated by the coronavirus-triggered capital squeeze hindered cannabis deal-making during the first half of 2020. However, experts say mergers and acquisitions in the fledgling industry will pick up heading into the new year.

Cannabis-related companies completed or announced 124 deals in the U.S. or Canada during the first seven months of 2020, less than half of the prior year’s total for the same period and even further behind 2018’s total, according to an analysis by S&P Global Market Intelligence. Capital raising for cannabis companies in 2020, meanwhile, continues to trail levels in either of the prior two years.

“If you look at what’s happened in the last year, especially with valuations in the cannabis industry, you’ll see that really severely limits the field of potential acquisitions,” Haskell of Canna Angels said. “In theory, it’s interesting for sure, however in practicality at this point in time I don’t see it being a great mover in the industry.”